Waiting for instructions on how to calculate my "BDH" position.

I am in Rio, Brazil

Thanks leotruther!!
I will put out the steps within a day or so.
BDH

The Process of calculating Latitude and Longitude on a Flat Earth occurs by performing a number of steps over two days.
Note: These steps will be supplemented with photos and illustrations as the particular step may require.


Day One
1.  Find a level area or make one.  The shadow you will be employing will be distorted on a slanted surface.
I used a table and covered it with a sheet of card board making sure the table was perfectly level. 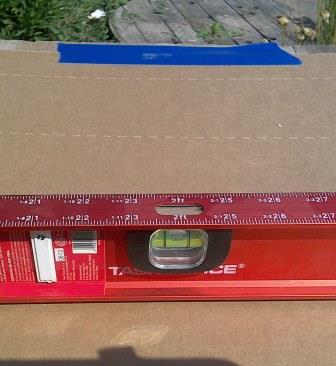 2.  Set a post perpendicular (P) to the level surface you are using. 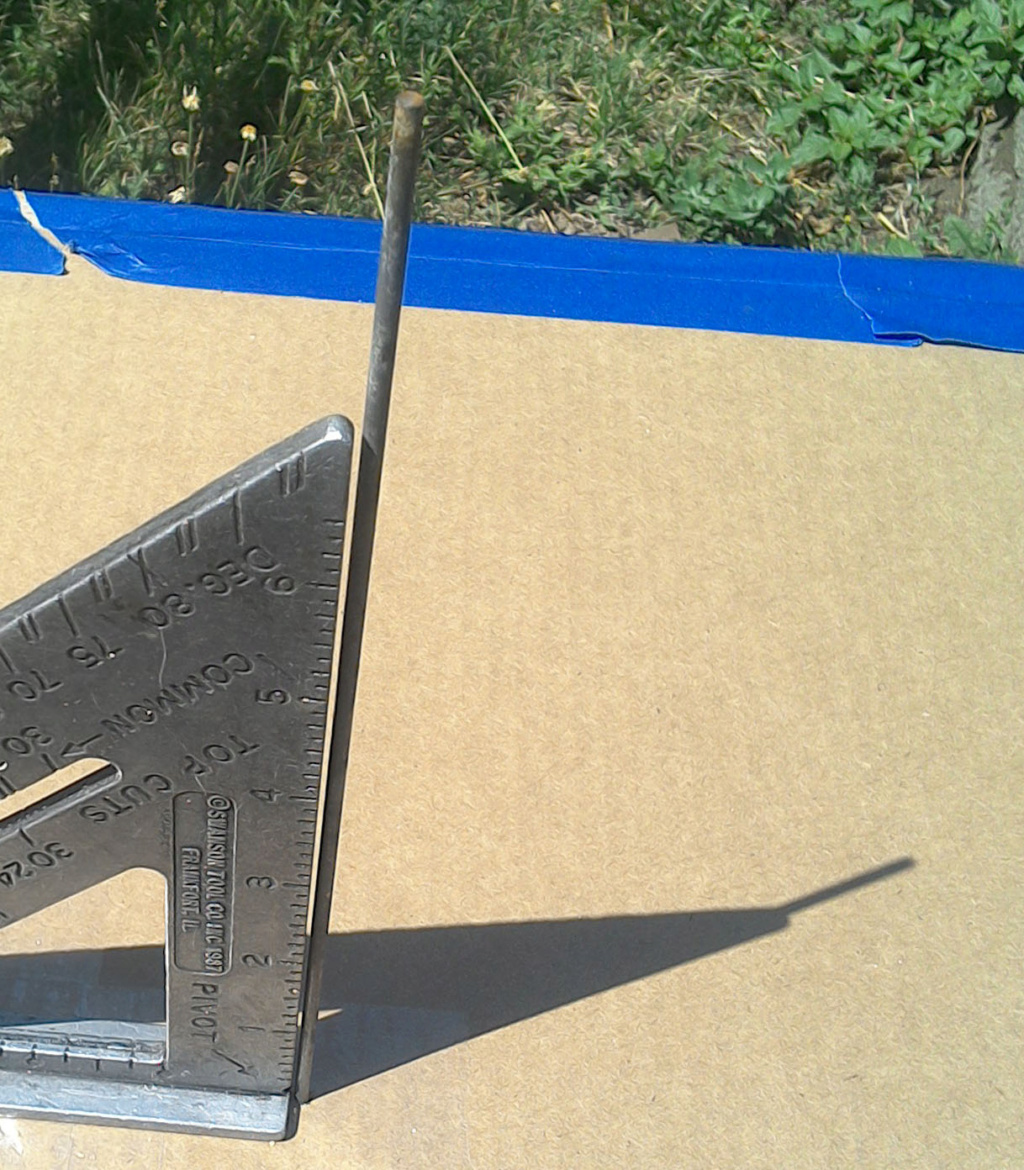 Find True North
3.  On day One, being a sunny day of course, start tracking the shadow of the post as it makes its way across the level surface (S) you have set up. (in my case the cardboard on the level table).  Starting about 11:00AM local time begin marking, with pen or pencil, the spot on the surface where the top of the post shadow ends.  Continue marking the surface where the top of the shadow ends every 10-20 minutes or so until about 1:30PM local time.  The marks made on the surface (S) will result in the shape of an arc (A). 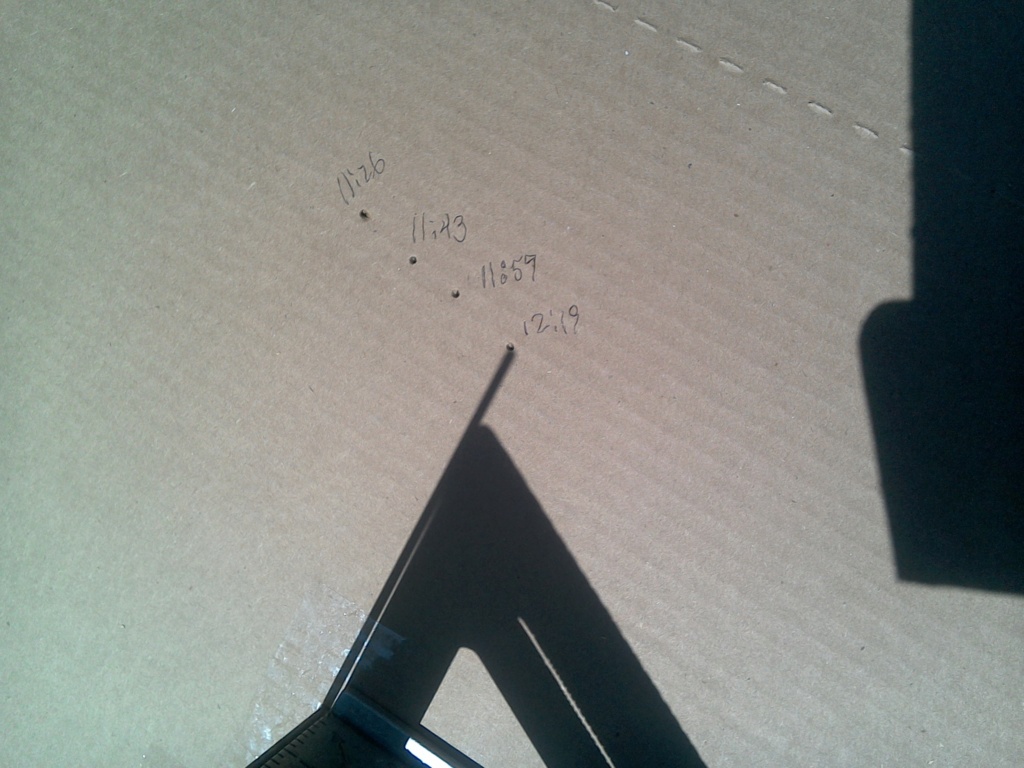 4.  Connect the dots on the Surface (S) by connecting them with a smooth curved line. 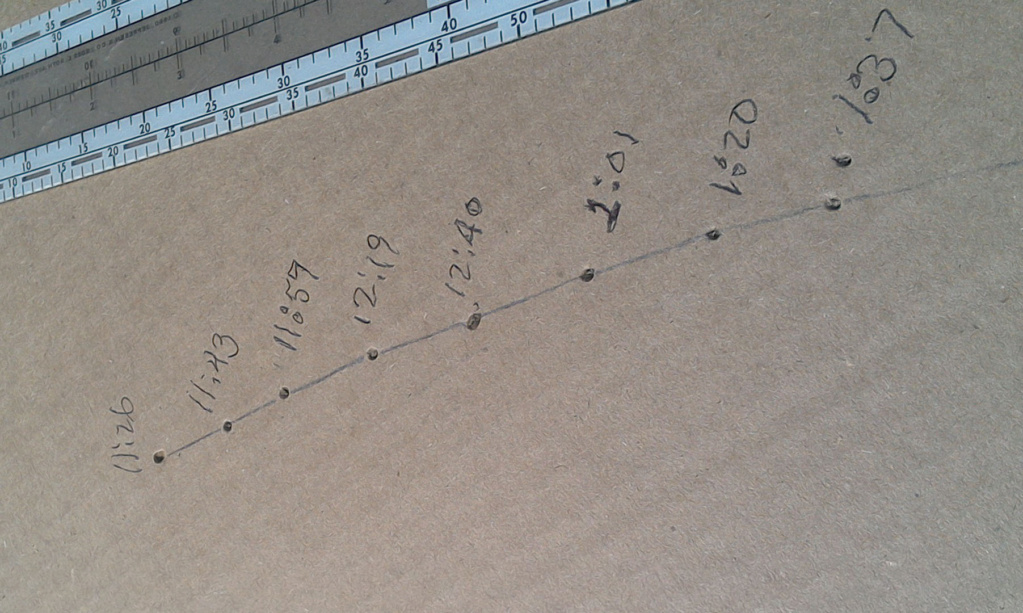 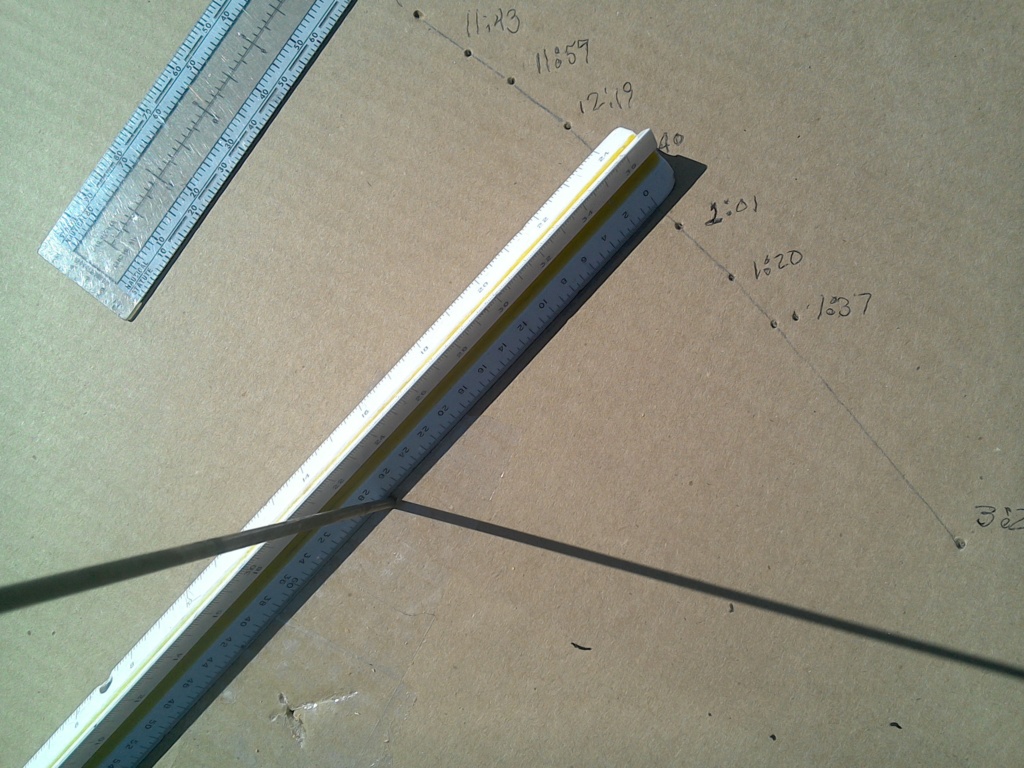 6.  Draw a line from the base of Post (P) to the point N.  This line represents True North .  We will call the line TN. 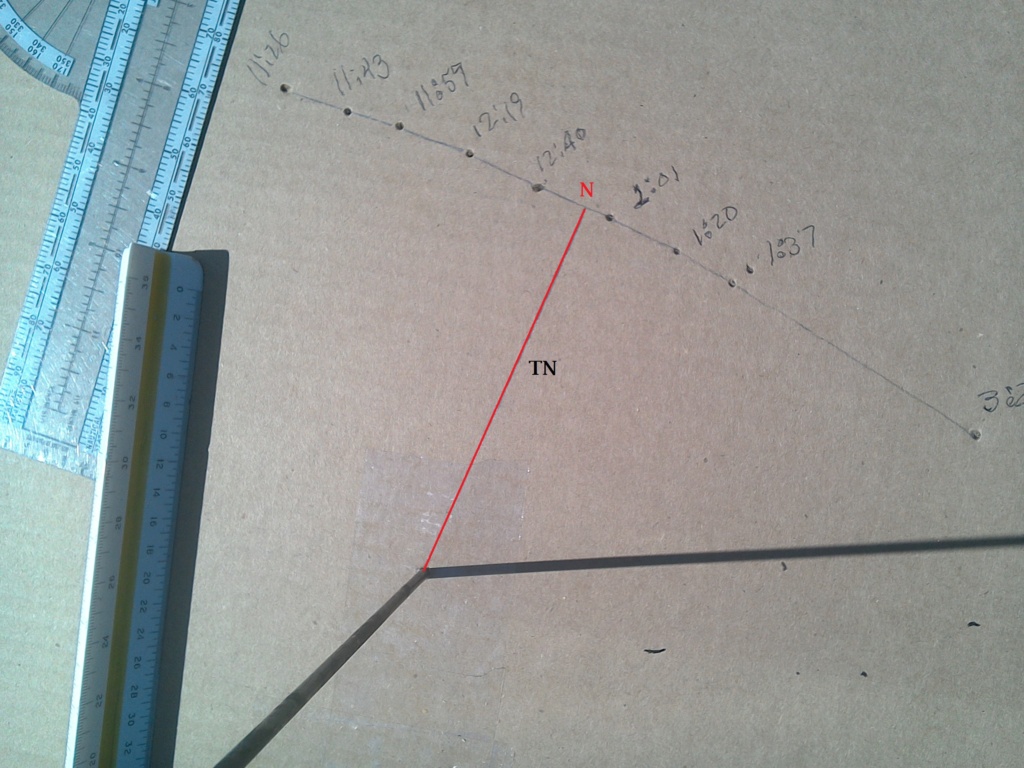 Why is this?  When the Sun is at its highest point in the sky at your location -- the zenith, the shadows will be the smallest.

Continuing with Day One, we can now calculate Latitude based on the
1. Height of the Post,
2. the Length of the line TN, as well as
3. a Tangent table or Tangent calculator, and
4. the current position of the Sun latitude-wise on Day One.

First, here is the definition of Tangent: 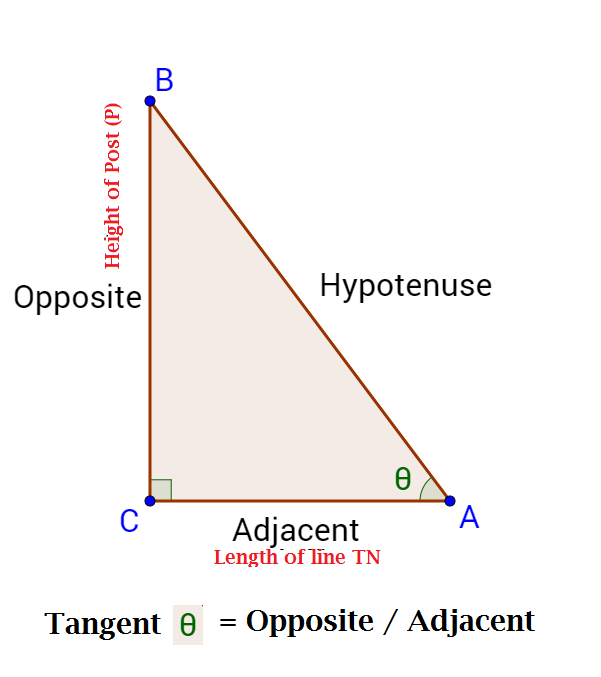 To find the angle

To get the value of the angle

Use Arctan (Height / Length of TN) to get

Next, calculate the position of the Sun on Day One in terms of its Latitude.

For example, the date of the exercise was on July 18th, when the sun has started its trip South from the Tropic of Cancer.
Referring to the table in the previous post, we have:

To get the Latitude of the location in my example where

We will find Longitude on Day Two.

If the Sun and the location are both South of the Equator, the Latitude of the Sun will be Subtracted from

To find the Longitude at one's location two items are required:

a.  The shadow of the Post (P) falling directly on the line TN (marking the Sun's zenith) and
b.  The current local  time (to the second) along with the time in London England (UTC).

Note:  UTC will be used at the base time for our Longitudes rather than adopting something completely new.

1.  The following photos are taken as the Sun approaches the line TN (its Zenith) 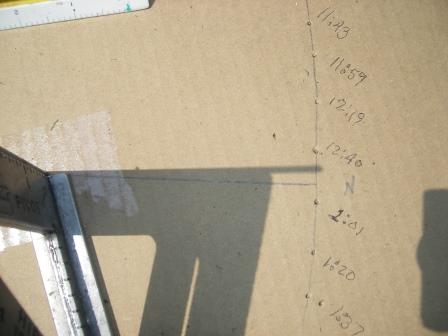 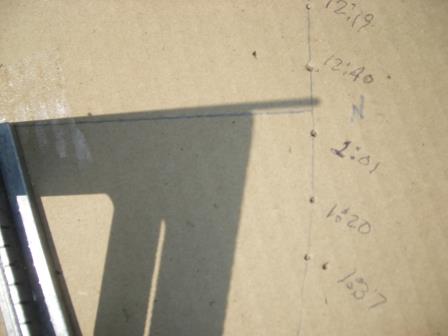 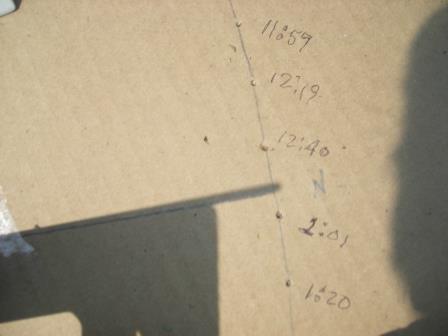 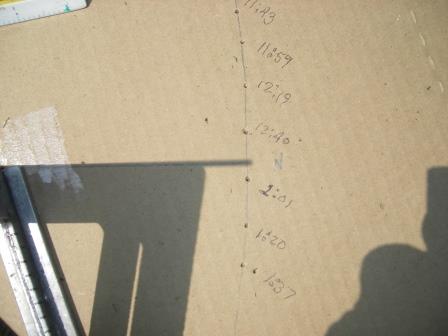 ** Since there are parts of the world that use Daylight Savings Time and some do not, let us perform the time difference based on Gleason's map, which map provides a consistent time difference between your general location and Greenwich Mean Time.

We know that the Sun moves once around the Earth, that is 360 degrees in 24 hours.  This equates to 15 degrees per hour.

So I am at some longitude greater than 105 degrees as the Sun passed the Zenith at my location at 12:53:29.

I will follow up in my next post with the simplified version of the process of finding Latitude and Longitude locally. 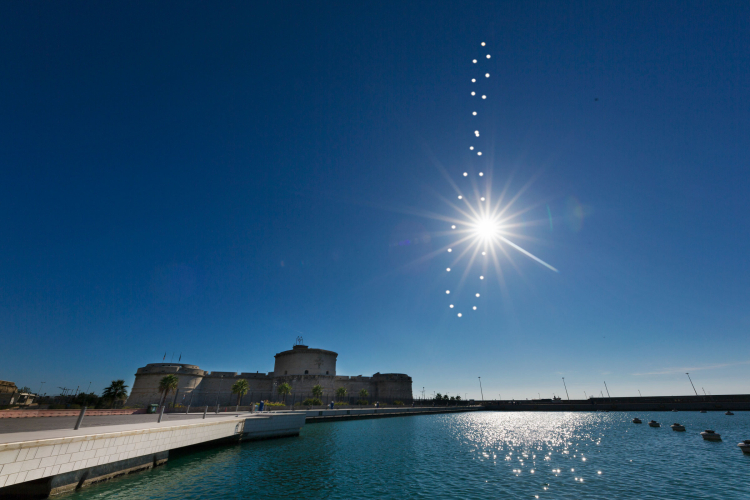 I believe I have posted the Equation of Time in an earlier post and then soon dismissed it.  Not so fast.

This question has come up due to my further testing with the Latitude and Longitude derivations.  I have found that my Latitude calcs for the Sun are matching nicely.  However, the Longitude calculation has failed to provide the precision I would like to see.
One of two things may have occurred to upset the Longitude calc.  My setup was moved slightly in the past few days, OR  the Analemma needs to be brought into the calculation to give me the precision required for Longitude.

If it is the Analemma, then a discussion of the Equation of Time may be needed. 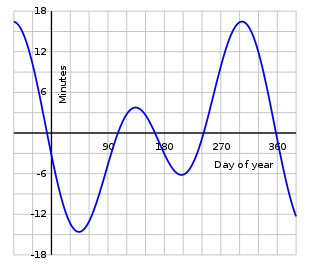 BDH - your observations are good . You are seeing and charting the change of sun position as it travels around the plane and between the Tropics.  The Analemma photo is proof that it is the sun that orbits and moves nearer or farther , higher/lower as the seasons progress.

The heliocentric model cannot account for this observed motion of the sun .

The equation of time attempts to explain this with math trickery . Actual observed sun position is mapped onto a graph and matched with the imaginary (theoretical) position of where it should be according to the heliocentric model . It's nonsense.

The sun does not move at a constant 15 degrees per hour so you might be able to adjust your calculations to factor this in . The amount of change of velocity will depend on your place of observation. Sounds complicated. Hope you can do it. 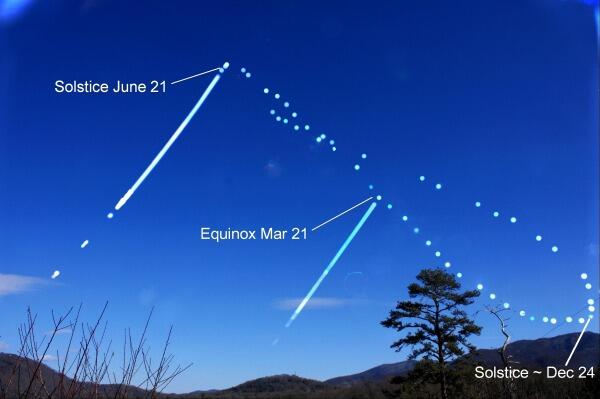 And I have calculated a table that charts this motion.  Thus, half the motion of the Analemma is explained and measured.

However, the East-West motion of the Sun as shown in the Analemma is the question. 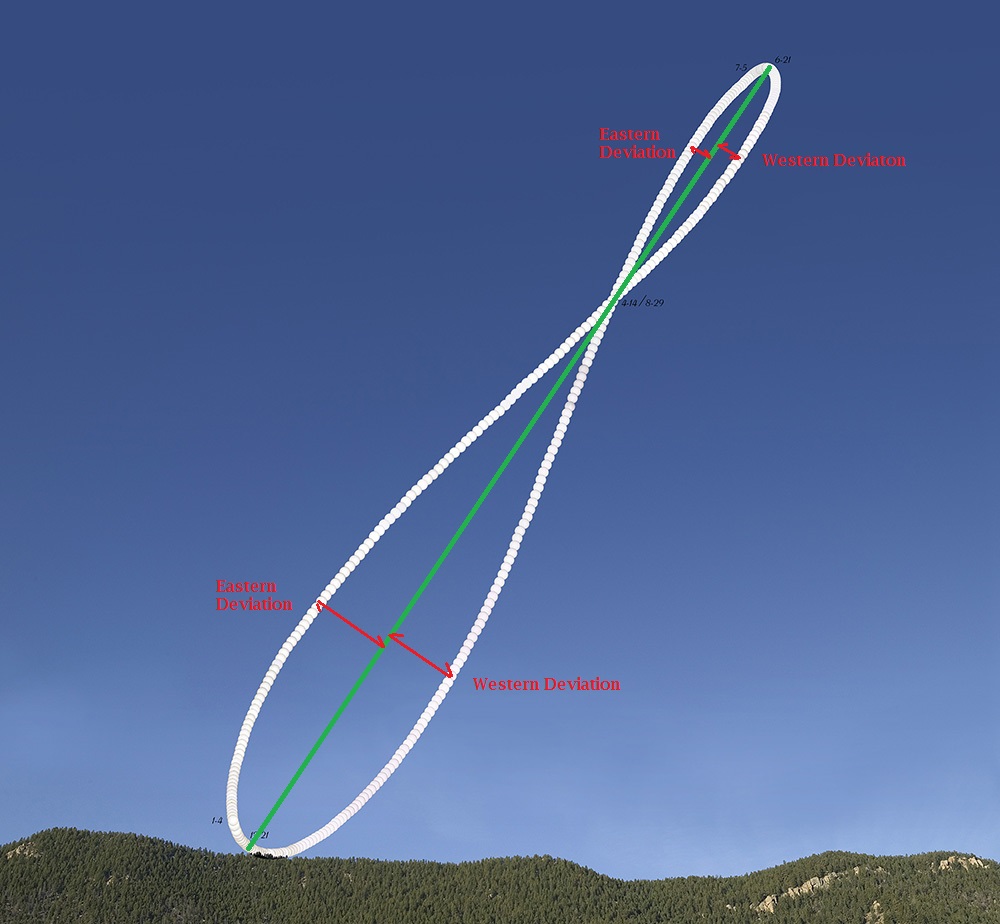 This deviation East and West has an affect on the drawing of True North on the surface of my setup.  The arc formed each day will vary and so will change the point on the arc where it is the shortest distance to the post (P).  The shortest point will swing back and forth like the Analemma does.

Going forward, two things have to be established:
1.  Still using the Sun, the correct meridian indicating True North will have to be determined by choosing a particular date that works for this.
2.  What is the degree of deviation based on a given date for calculating True North?  That is, how many degrees do we use for any date on the calendar?

For a solution to #1:
From the following illustration, the Solstices are being used as the True North indicator on the Analemma.

Marking True North with no deviation will be  set to June  21 and December 21.
The test will be marking the shortest distance on the arc to the post on June 21st and then doing so on December 21st.  If these line up, we have our True North line.

Next, how to determine degree of deviation on any given date in the calendar so that one does not have to wait until the Solstice to get the True reading of North?

See the following illustration that makes such a relationship: 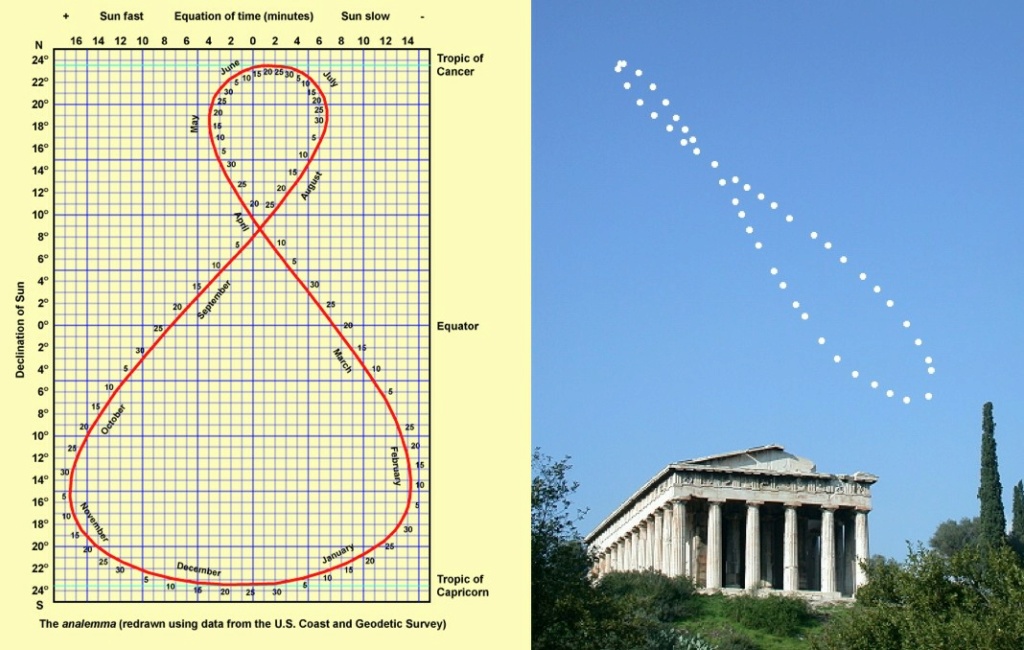 So, can we use the minutes deviation in the Equation of Time  to get the offset for determining  True North on any given day of the year?

The answer will be in the testing, which I shall perform with the setup I have in place.
I will provide the calculation next.

Another illustration of the Analemma with minute marker deviations associated with every 5 days in the year. 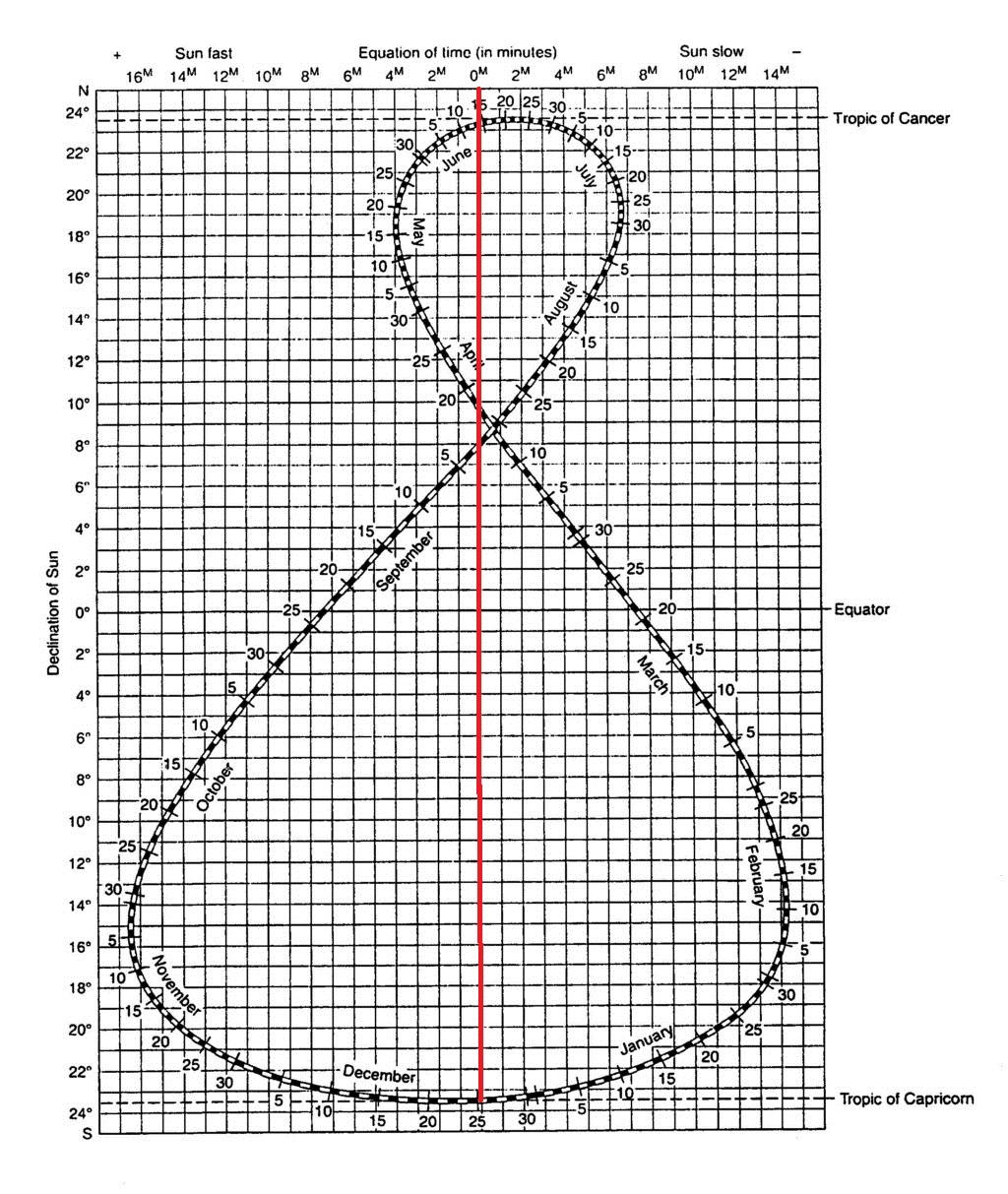 It would appear that December 25th and June 15th are the golden  dates for no deviation off the local meridian.

Further note on the illustrated Analemma in previous post:

The compressed scale of the shape of the Analemma indicates a skewing of the Sun's Declination values to fit the globe model.  Testing via real world experience shows a marked difference in the values of the Sun's Declination as compared to the chart in the previous post.
Likewise, note the difference in shape between the Analemma illustration and the photographic evidence.  The illustration is a fat exaggeration of the real Analemma evidenced by photographs.

As such, the illustrations showing the numbers of the Sun's declination indicate that the values are coming from somewhere else, as they do not fit Real World data.

Summarizing, one can use the Deviation values on the Analemma chart but dismiss the Sun's Declination values.  A more representative chart can be constructed which will more perfectly fit what we see in reality.
Like this real world analemmatic sundial !! 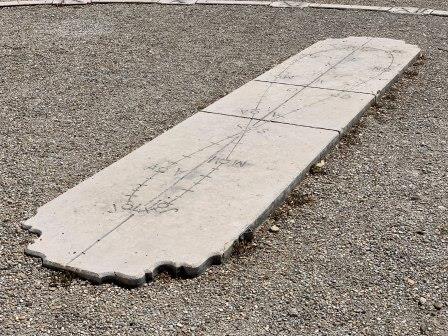 Further research is indicating the following:
-- The Analemma is accurate both for the North-South procession of the Sun and the East-West deviation as the Sun speeds up and slows down throughout the year.
-- As such, I am adjusting my calculations to match those of the Analemma as regards North-South and East-West.
Yes, this is contradicting what I stated earlier about dismissing the Sun's Declination values in the Analemma table. But I can see now that the North-South procession of the Sun is not a constant linear procession but in fact forms the curved path one sees in the Analemma.
-- Consequently, the known data from the Analemma will be used as the measuring base for our calculations of Latitude and Longitude.

How is Latitude affected by using the Analemma?
The calculation for Latitude will utilize the Declination of the Sun found in the Analemma tables.
This will vary to some degree from the table I had constructed earlier.

How will Longitude by affected by using the Analemma?
The East-West deviations found in the Analemma table will be incorporated in the calculation of Longitude as well.

How about True North?
True North, being the most important consideration in calculating Latitude and Longitude, does have 4 dates on the Analemma that show NO deviation from the local Meridian -- April 17, September 2, December 25, and June 15.
That is, on those dates, when the Sun reaches the Zenith of the local meridian, its shadow will point True North with no Deviation.  Of course we can get True North on any date using the deviations provided in the Analemma table.

Going forward then, we will use the Analemma table for calculating local Latitude and Longitude as the Analemma is found all around the world and as such is consistent for our use in helping map out the flat Earth. 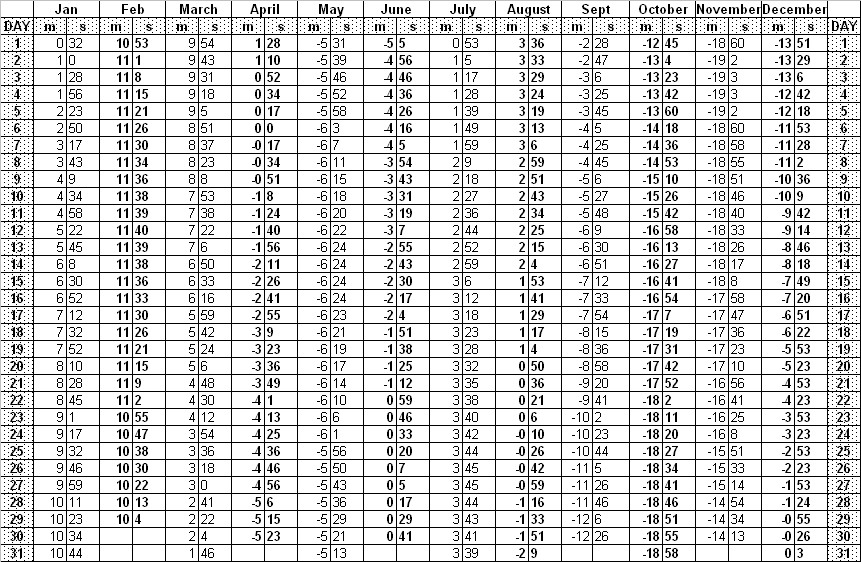 You can check true N against the pole star if you can see it - if it aligns with sun position on those days you mention then that's good .