No Curvature on the Flat Earth

Just found this little minute long vid that tells us all how curvature, or lack thereof, is explained away on a planet as big as it is. I don't know why they keep scaling things in the video, but it's interesting nonetheless less but severely lacking in detail considering the are demonstrating on a circle me not on a sphere.

A flat-Earther on Twitter reached out to send me the following Excel file which he claims contains the correct mathematical curvature calculations/formula for the globe model. His message is as follows:

I created this spreadsheet to calculate the exact mathematical slope (curvature) of a ball earth for ANY point on a ball earth. This way I could test it out to see if it was even close of a slope, based the test on my own location by my Latitude. You or any one else that would view this document could check their calculated slope & speed of rotation based on the latitude for themselves, I'd bet they'd be surprised. In my opinion, this document destroys the Heliocentric ball earth theory.

The idea is to take an imaginary 1 unit wide slice of the ball earth, cut it into 4 equal sections, then place the top right piece on a X & Y axis. The 4 equal sections would have the same calculation, just negative x or y values.

"Data Points" - Column A is the degrees of latitude spaced approximated 1.04 mile apart (.015 of a degree of latitude), for Excel, it's converted into Radians in column b, Distance along the curve in column C, Sine & Cosine produce a percentage of 1 in D & E, X Axis is the cosine of the radius, Y axis is the Sine of the radius. Once the X & Y locations are found, the slope calculation is the most important calculation - the change of the Y value, divided by the change in X. For row 2701 of the spreadsheet is my location, at the latitude 40.44, the Slope Ratio is calculated to be 1.17 which since it's a ratio, it's value is 117% change, therefor for every 1.04 traveled North or South, the earth would have to slope 1.22 Miles of curvature. It's way more curvature than even the commonly thought couple of inches, it's miles. The only place with inches of calcuated curvature is at the N. Pole, but towards the equator the slope is enormous, it really depends on the location of the X,Y location. Also interesting is the calcuated Speed of Rotation based on the X,Y location. Most people don't think about that, but there'd be differing speeds based on location along a ball.

"Earth Chart" - this is a chart of the earth's "curve" based on the X & Y data points, therefor confirming that my X & Y locations were accurate, as they produced the "Curve"

"Example" - I test Pullman Rail Journeys of a 900 mile rail road trip to find that if on a ball, there would be a 137.98% slope from the starting & Ending points. Again, not possible. Below that test, i do an example to test that my slope calcuation methodology was correct & I create a data points to recreate the steepest measured Slope of a Road on Earth, Baldwin Street, which has a 35% slope. This confirmed that my calculations were performed the same as Data Points & is how slope calculations are made by the engineers.

Sorry for the long email, wanted to explain & give a guide on what it all means. Feel free to critique or follow up with any questions or comments. I ran the spreadsheet accross the smartest college professor I had years ago & while he didn't understand what i was doing, he confirmed that my calculations were accurate.

Great, im glad you shared it, interested to see any comments.

I know what you mean, it's alot of numbers/data & can be overwhelming to look at the 1st time. I just want to follow up trying to simplify a couple things the spreadsheet proves so that it clicks & you understand the math/geometry, & that the actual math matches your message that ball earth isn't even close to being a reality. Also, feel free to add to the post.

- Sampling Data - i was trained as an financial auditor years ago how to handle large audits (multi million to multi billion) over 3 year audit periods. Basically, we would test 6 months worth of data for a 36 month audit period (16.7%). If we found that the company had $60,000 worth of noncompliance in those 6 months, the company would be assessed a bill for $360,000 as the assessment averaged $10k per month in those 6 months. Many conversations were that the assessments weren't fair, as it was only based on 6 months, & there could've been 1 or 2 errors in those months that threw the averages off. This is true, just as there couldve been months not tested that could've had no errors. The only way to have a 100% accurate assessment would be to test all transactions over the full 36 months, but never was done due to the amount of time & effort it would take to test all 36 months. However, for any large audits - Sampling data is the most commonly accepted practice because it's reasonably accurate and not as labor intensive. Sampling the Ball Earth is what the spreadsheet is. For this Earth sample, imagine taking a 2 foot wide slice of a ball Earth of where ever you are standing, extending through both the N & S Poles, and then placing that slice on a X,Y axis. However, this sample is 100% accurate due to the properties of a ball really just being many circles of the exact same size around a central axis. Whether that 2 foot slice has you or me on it, the measurements would have to be the same. 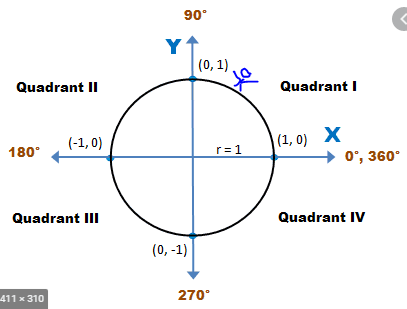 - understanding a ball - if you pick up a ball, it appears like there's a constant curve/slope & no matter which way you turn the ball in your hand, the ball looks the same. This perplexed me for a long time & I accepted the thought that the curve would be constant, such as a 8 inch curve. However, once you determine there to be an axis through the ball, such as a North & South Pole, then the ball is able to be measured on a X,Y axis. This would mean that the point (0,1) in the picture above would be the North Pole, where as (1,0) would be the Equator. This is where the Theory of Relativity comes into play, as those believers will say that everything is relative & the same & we won't feel a difference. However, as you see above, there's a definite up or down the curve the stick figure would travel along the curve if they were heading North (up the curve) or South (down the curve), & that amount of curve is changing.

2 most important parts of the spreadsheet & message (Column I & J):

- Changing Slope Ratio - the 8" per mile squared is technically correct, however 99.9% don't understand what this means. The 8" of slope is only applicable for the 1st mile traveled south from the North Pole. I actually confirmed this in my spreadsheet on line 6005 (slope will show zero bc rounding, just need to increase decimal place):

After that first mile is traveled, the slope ratio increases exponentially each mile traveled south along the curve, which is what the 8" per squared mile really means. Most ppl when looking for Hidden Height will take the distance between the objects & multiply by 8" per mile squared, but that's not an accurate methodology, as the 8" is the Minimum amount of slope per mile & that is only for the 1st mile south of the N. Pole. All subsequent slopes would have different and greater slopes per mile when heading South towards Equator. This makes sense when looking at the curve, the red line is rather flat at the North pole, the Yellow line gets more steep towards Greenland, the black line which would be N. America has greater steepness: 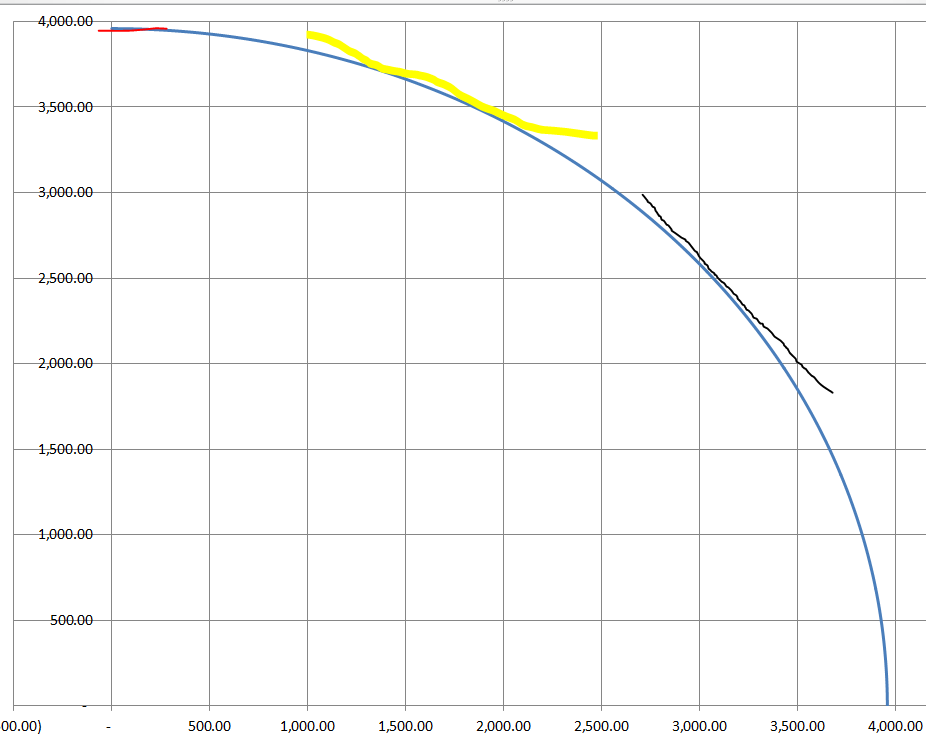 This sample provides the curvature calculation per mile so that anyone anywhere can check what their slope should be if they wanted to check for them selves. Many locations in N. America would be over 100% slope per mile, so that would mean on average, a traveler would have to climb or drop at least 1 mile vertically per 1 mile traveled horizontally. This is the part that even fellow Flat Earther's don't realize, the mathematical slope is not small or 8 inches per mile, depending on the location, the slope can be well over 200%, when the steepest road we have on Earth is 35%. Those differing slopes would have to stay uniform around the ball in West & East directions too.

To take this one step further, since we can take this 2 foot slice sample of the Earth in any direction, we would also be along the same curvature in all directions, such as West & East. The needed amount of ground curvature is way more than anywhere we can even imagine, there's just no way the ball earth passes the audit. We would feel like we're constantly walking up/down steps for there would be varying slope changes all around us if we were living on a ball.

Differing Speeds of Rotation: usually the 1,036 mph speed is given for the speed of the Earth's rotation, however, that would only be accurate at the Equator. All other points would be moving at different speeds based on the distance that point would have to do a complete circle. The N. Pole would have a very slow rotation speed, less than 1 mph, since it would be at the top & have very little distance to complete a circle. The purpose of realizing the differentiating speeds is that it is obviously not felt, though it would create very different forces of inertia on the surface, & people would have to adjust for the differing speeds. Imagine living at the Equator with 1,000 mph rotation, then traveling to Alaska, moving at 500mph - ppl would notice. You can see the red lines are much smaller or shorter closer to the N. Pole:

Sorry if this was too much math & numbers. I feel like I can explain this all in person much easier & quicker, but don't have that opportunity. The goal of this is more of a confirmation to all the other proofs you're aware of that we're not on a spinning ball, & I hope that I can someday help someone understand the truth. Would love to use my math against any of those so called scientist one of these days.