As for your proposal and the controversy surrounding it, I won't get into a philosophical debate with you any further.

Why is there controversy surrounding a structure built on a level plane with water tubes, horizontal and vertical, with equidistant marks on each vertical tube above the plane foundation that they rest upon, and built along a 5 mile (we settled on 5 miles) stretch of Earth? Is the discussion of such structure "philosophical," or simply a discussion of a design that invokes mental acuity bearing on the practical design and what it proves should it ever be built? A demonstrable fact in nature.

Has it not already been built in our minds?

Whether or not a bigger project gets built physically, I love the design!

I'm only looking for clarity like we all are. I think I've come full circle— as the sun in 24 hours, regardless the varying circumferences traveled, big and small.

I'm not trying to be a smart-ass, I'm only asking why you believe it's philosophical (after all, Philosophy is Philo+Sophia, love of wisdom, is good), but yet controversial in your mind? It would be built in nature. Natural. Money is no object to the principle it's built upon.

Is my point about Bill Gates his operating system, versus the competition, or his money? Did you not understand the parable?

Not so much interested in gawking at pyramids, adopted by Freemasons, and built to their own vanity. Agreed?

This whole thing is more than just about facts and natural science and proving things. If it wasn't, all this would have been resolved a long time ago.

It's already been resolved, correct? You and I both know the Earth is built on a horizontal plane with irregular hills and valleys throughout it, correct? And you and I both know that the espoused design of the project is a monument to water's property to find its own level on the plane containing it in various basins, correct?

I ask, is this discussion more than "just about facts and natural" demonstrations proving the plane reality? If so, why should it be? Just the facts, mam, or I'll have to take you down to the station. Am I not remaining focused on what is demonstrable in nature? And are you trying to distract from that? What has not been resolved in your mind that the project unequivocally proves the Earth built on a plane, if built, and is of sound design accomplishing what the designer intends to prove? Do you understand the design of the project, whether built or not, is more proof, Earth Not a Globe?

I'm trying to find out where we're on the same page and where we differ. Do we have these things in common?

Do you agree the design is accurate and that it is, by virtue of Design, a demonstrable proof Earth is a plane, whether built or not? After all, it's only collected water.

This whole thing is more than just about facts and natural science and proving things. If it wasn't, all this would have been resolved a long time ago.

Do you agree the design is accurate and that it is, by virtue of Design, a demonstrable proof Earth is a plane, whether built or not? After all, it's only collected water.

I do love my flat earth brothers, though. I think they are a special group and I'm privileged to be among them, and learning from them.

Eric Dubay speaks of the Socratic Method, a "cooperative argumentative dialogue between individuals, based on asking and answering questions to stimulate critical thinking and to draw out ideas and underlying presuppositions."

That definition is from Wikipedia, of course. What? Did you think (((they))) would have an algorithm that does something other than place their mouthpiece first in the list? Controlled disinformation. It is about control, correct? Isn't that why they commandeer young minds to make globe impressions, first?

Wikipedia says of the Socratic Method that it is "argumentative." Really? I am, have been, argumentative, and I'm trying to learn not to be. Is it not hard to argue with somebody only asking questions?

Another thought on the Socratic Method: "The Socratic method is named after Greek philosopher Socrates who taught students by asking question after question. Socrates sought to expose contradictions in the students’ thoughts and ideas to then guide them to solid, tenable conclusions." https://tinyurl.com/yx9obhny Nothing about "argumentative" there. But the method aims to "expose contradictions" in the "thoughts and ideas," of the ones questioned, to then "guide."

Why can't the algorithm simply be purely objective? Wikipedia would hardly ever come up first then, correct? Why would I ask (((stooges))) who can't even figure out that water settles into a level plane, about anything else? They aren't very bright.

Has the monument been built sufficiently, whether water hose or massive monument? Are not both monuments to the truth? Does water act contrary to its nature as it's poured from one container into the next? We take back from them their use of big water basins as proof of bendy water. They don't like it.

Do the Sons of Darkness get it? Why do they shun Dubay if so? And why the need for baseball bat threats? Who won that particular debate? The representative from the fake dinosaur meme? I wonder if he has ever understood just how badly he was thrashed by Dubay, and Dubay wasn't even there in person– and still hasn't been there in person, Joe Rogan. Nice of you to burn him in effigy, though. Gosh! Sons of Darkness just don't get it.

Well played, Eric! "The Socratic method forces students to define, articulate, and apply their thoughts. If the professor gave all the answers and broke down the case himself, would you really be challenged?" –taken from above not-Wikipedia quote

"World History Official" on youtube had over 200 amazing videos on flat earth that mysteriously disappeared. They were better than anything I had ever seen as far as scientific study and history on flat earth. They would not explain to their audience why this happened. I believe that hackers possibly working for NASA wiped them out. They would also hack my comments so it is possible that if World History Official tried to explain what happened, their comments would also be hacked. https://www.youtube.com/watch?v=joUthPMaRtA&fbclid=IwAR2HUqlUdcpiVEb9FWovKoA_ttsLwAI78cGwk-TunduXLIKKgDX7UwkNMS8

markwilson wrote:
what we see in the time-lapse is a ship following the curve of the sphere
Why are you taking this position

Mark, maybe you should start explaining things to Balltards in a different way; keep it at a 6th grade level.  After all, your proposed "water monument" and it's expenditure is only there for the benefit of Balltards. 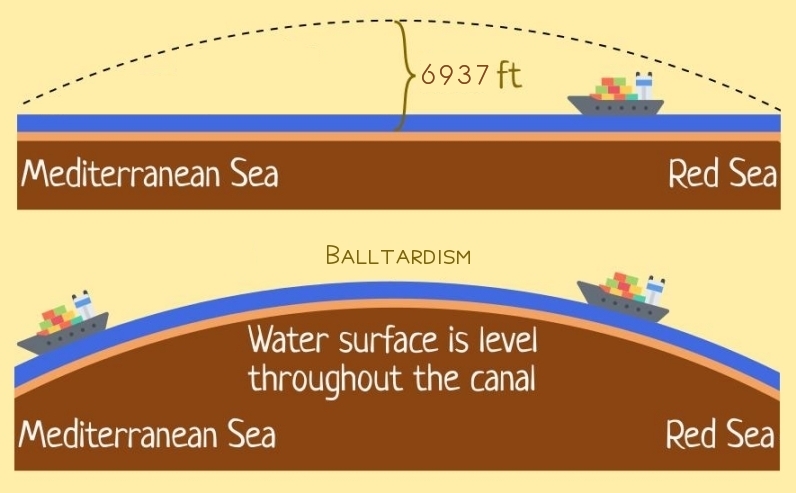 This would be great evidence, however I come across some sites that claim Suez Canal have variations, what is your say on this?