"Recipe to make a god: Take 33 1/3 per centum Ignorance, 33 1/3 per centum Credulity and 33 1/3 Human Ingenuity. Mix carefully and let stand until fermentation sets in. Then add quant. suf. [quantities sufficient] extract of the Miraculous, and vary strength of the mixture to suit powers of resistance of locality" [i.e., the resistance of a particular locality's challenge to the priestcraft's claim the god literally exists] —Ingersoll Lockwood, Laconics of Cult, Section First, SUPERSTITION

"I know little of thy Jewish demi-god. We do not love the Jews in this imperial [Roman] capital. They are the butt of our ridicule on the stage, sodden in credulity and superstition. Our great poet Horace says: Credat Judaeus Apella!" —Ibid.

"Credat Judaeus Apella, non ego"
A common Latin saying meaning "Let the Jew Apella believe it; not I". The phrase means, roughly, tell it to someone else, not me. The reference is taken from the work Satires (book one, satire five) by ancient poet Horace. It is derived from a scene where people try to convince travellers of miracles happening at their shrines. The phrase is uttered to convey the disbelief and that they should tell their stories to someone else. (emphasis added) https://tinyurl.com/ycwhdf9v

What about the obvious star of remphan worship with the jews/catholic's/masons, it's clear satan worship. Which was told about in acts 7:43?

I really want to hear Erics opinion on the star of remphan and Black cube worship that the bible said they worship and clearly do.

Thank you so much for your work. Without your work i would not have come to the flat side so thank you for opening my eyes to something that truely changed my life you will never know how much you did sir.

personal savior and the loving yet sadistic father conundrums

I have been trying to delve deeper into the Bible trying to find guidance in my life and this really helps resolve one of the greatest hangups i've had on the whole thing which is this idea that one of the ultimate conclusions i am supposed to come to is that i must accept Jesus Christ as my personal savior who died for my sins, etc. Because i cannot wrap my head around that concept without some sort of compelling argument of why it is real and necessary, it has made me want to reject the entirety of the bible and christianity. however, from this perspective, it seems there are ancient and natural truths "hidden" within the bible that anyone can learn from and it is completely acceptable to use the bible as a resource for understanding this world while at the same time completely rejecting the ridiculous idea that you have to genuinely accept christ as your savior or else, as is said in this video, you will ultimately live in an eternity of unimaginable horror as a form of punishment by your loving god for basically not bowing down and telling him how great he is and how thankful you are for the miserable life he has let you live. if you can throw out that nonsense, you can actually find useful information in other parts of the story. but it truly is astounding how many people are so caught up in that ridiculous idea that defies all logic and reason, even by people who reject otherwise equally ridiculous ideas but hold dearly to this one. i've always maintained that if there is an all powerful creator, and if he/she/whatever it is exists in some capacity as an overseer of everything that happens, then "he" would certainly understand my reservations about thinking that he could be at the same time all loving, all powerful, all knowing, all forgiving and yet want to damn me to eternal hell for simply not telling him how awesome i think he is and not accepting his supposed son as my personal savior. surely he would at least be willing to have a conversation with me based upon the experiences of my life before he damned me to eternal punishment.... even though it is claimed that it hurts god to see his children suffer, so it must be really hard for him each time he condemns one of us to eternal punishment for not celebrating his greatness; or for not accepting his "son" as my savior even with no evidence- besides am i not also his son? the whole thing reminds me of exactly what i don't want to be as a father, so therefore i cannot accept that even the creator of this reality would demand such things as a father either. i simply hope my children will respect and trust me because i want to guide them towards the best life possible. i would never ask of them to feel like they owe me anything or need to tell me of my greatness. i would never simultaneously love them unconditionally yet damn them to eternal pain just for not telling me how great i am or believing the things i believe.

Can someone help me sort this out..

After reading on the sight about the mason's and specifically numerology of 666, it seems very clear that this world is run by Satanic people, no?  So if the people with the most power here are satanic doesn't it stand to reason then that Christ would be real?  Why would they cling so much to a belief in something that wasn't true and push lies that "hide God" but they follow an anti-christ way of living?  I am struggling with this.  I hope this makes sense and I appreciate anyone's help.  Thanks!

My opinion is that christianity is largely based on ancient paganism and the satanic elites view religion through that lense. They dont believe in the bible they just mock Christians. I believe they look at their diety in a separate context from biblical perspective. The Christian's look at satan worship as the devil in the bible, I dont believe the elites do.

Also the elites consist of many jews who really hate white people . in general they simply seek to demoralize people of a the dominant religion of white people. Theyve done this with even the norse gods as well with fiction works. They simlly hate jesus because people believe in it not necessarily because they do

After reading through the many responses in this thread, I am surprised that no one has mentioned Caesar's Messiah by Joseph Atwill which I consider the definitive work on the jesus question. basically he says that jesus is a literary figure invented by the Flavian aristocracy to replace the militant jewish messiah motivating the jewish rebellions with a pacifistic turn-the-other-cheek, pay-your-taxes, obey-the-roman-authorities messiah-savior. given the many military problems with subduing the jews, other tactics were required to pacify judea, a task which was not complete until c. 135.

his evidence of Jesus' identity, the avatar of titus, is that the former has a ministry which follows sequentially and congruently that of titus as found in josephus' jewish wars. when the roman senate deified Vespasian, he became god the father while his son titus became god the son, who was also deified by the senate. his brother Domitian was god the holy spirit. thus the gospels and new testament are the ultimate psychological warfare device. there are no spiritual truths to be found in the gospels, and many verses which are considered to be pietistic are in fact the most ribald, and frequently obscene, sarcastic remarks hurled against the jews.

thus attempts to spiritualize or distill jesus, or to reconstruct him in the light of longstanding myths, or to deconstruct him from an accretion of historical miasma are wholly misguided. there is no authentic Christianity other than to obey your Caesar.

Jesus was a aryan. The jew, the parasites, only did what they always do by assimilate and changing reality according to their own need. Religion is mind control. Christianity was a downgrade of white spirituality which allowed (((them))) to replace us with non-whites. End of the story. 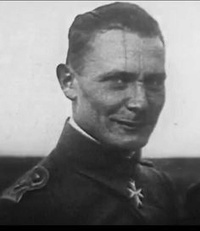 Jesus identity? What you saw a picture? What proof is there even for his existence. How easy is it for religion to have a head figure to sweep everybody in the same religion.

AlmightySavoisien88 wrote:Jesus was a aryan. The jew, the parasites, only did what they always do by assimilate and changing reality according to their own need. Religion is mind control. Christianity was a downgrade of white spirituality which allowed (((them))) to replace us with non-whites. End of the story.

I agree about 1. 'Jesus' or a figure representing an exceptional person known by that name actually existing.

This is chapter 23 of volume 4 (out of 6), which covers a bit about Jesus and the early formation of the major religions. Take my word for it or read all their work for yourself at http://chronologia.org/en/ it destroys conventional history.

And 2. Religion is mind control (or more precisely; from the latin verb religare - to tie back, to hold back, to thwart from forward progress, to bind.

Science, Religion, and Philosophy come from one source. The Hermetica discusses this and outlines how the teachings have been distorted and manipulated over the years. The people that gave us the globe model, the Abraham religions, paganism and the eastern religions were hermetic magicians. Although Hermes is great and wise, he is also a trickster.

What r u talking about Jesus was an alien zombie telepath, duh (humor).

I believe the argument is about the literal interpretation vs the esoteric or symbolic interpretation of scripture. The esoteric and symbolic ties Christianity into the occult mindset. The esoteric/symbolic is really interesting and causes one to draw conclusions about Jesus being the sun and the pineal gland being the connecting organ that you can awaken you to see his father or the all encompassing light, aka the "I am".   When you start looking into it, the connections are mind-blowing and you just might awaken your hidden Jedi powers. There seems to be some dangers in occult research though. once you become super woke, you just might  turn into this guy:

Reading it, you might be afraid to think Jesus wasn't a historical figure because this would mean you're saying he didn't come in the flesh. Personally I don't have an issue with believing Jesus incarnated as a man, because this is the same as the Pharaoh's being the physical incarnation of the sun. The other interesting thing about this is the distinction the bible makes between the real Jews and the Satanic Jews.  The real Jews are the followers of Christ and the Satanic Jews would be our modern Jewish people. If you know who is running the world, its pretty alarming how accurate this is. We have a bunch of Talmudic Jews holding a lot of power and starting a lot of wars. Jewish Zionism seems to be their mission to totally enslave and destroy the Goy, with their messiah (the anti-Christ) ruling the world.