Welcome to the most important subject of your life.  This one subject will unravel all
the hidden secrets and conspiracies.

They tried to destroy us by shutting down the old 'IFERS' forum, but they have failed, and we will start again and again and again, as many times as we need to.

The cat is out of the bag, and we will not let them put it away again.

IFERS is back and is as strong as ever.

By shutting us down, all they are doing is making neutral observers think 'why'?

They have shown how scared they are of the truth of Eric's message, and that is why it is so important that we continue to spread the truth about our Flat Earth, now more than ever.

IFERS LIVES ON!! About in withdrawls, let's do this.
FLAT IS WHERE IT'S AT! 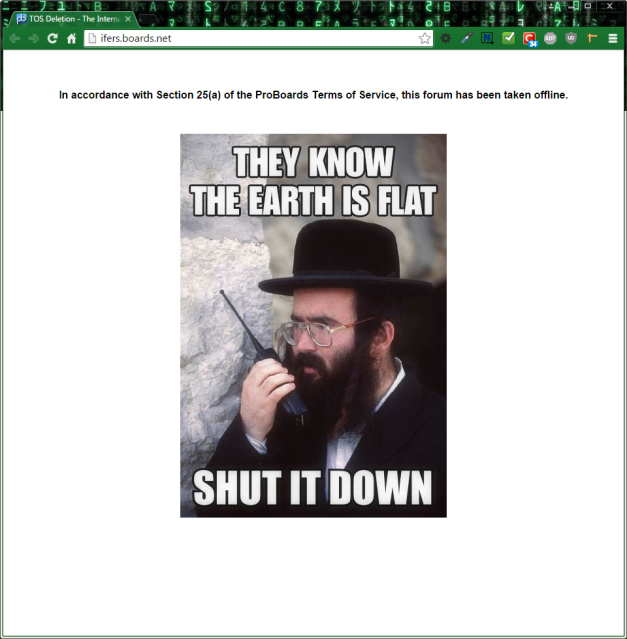 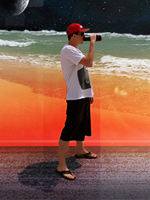 Hello again & thank you for bringin' up the forum.

JamesIsso wrote:Archive link to old posts (had to make it an image since I cannot post URLs yet lol)

Thankfully Schpankme backed up the entire old forum, and we are currently working out how to repost it here. Any suggestions would be appreciated.
_________________
All about Shillaphobia

Deleted the forum? Wow! We scared someone! Keep up the amazing work and let the bells of truth ring freely!

eusshu wrote:Deleted the forum?  Wow!  We scared someone!  Keep up the amazing work and let the bells of truth ring freely!

Exactly; the only reason why the old IFERS forum was deleted was because of their cowardice.

Thinkforyourself, thank you for informing me of the new board location.

ifers.boards.net violated what terms of service for Christ's sake????  5/4 odds die Juden had a hand in its termination.

I'm not sure why it posted guest. I was as member of the previous forum since Mid June...
It might be how I'm posting or something, I'm not sure.

Hey everyone, Happy Fleers! Looks like the shills wanted to start the New Year off with a bang by shutting down IFERS. Too bad for them we are quite aware and prepared for their under-handed tactics and will never capitulate regardless of what disgusting lengths they go in their attempts to stop the truth from spreading. The admins and I are working on getting all the old threads/research back now. For the next couple days please don't post new threads or post into threads which we are re-building. I will let everyone know in this thread when everything is back to normal and regular posting can begin again. Peace

If I can suggest for all previous members to re-registered on this new platform as I did.

Thanks for informing us ThinkforYourSelf and to everybody involved in getting the forum back up and running. Thanks.

Regarding suggestions:
How was the old forum backed up by Schpankme? Was the site ripped and there is now static HTML or is there a database dump of some kind, that can be re-imported?

Can users access their old posts somewhere? To share the work-load, every member could then re-upload their most important posts? Or is this something the admins want to do themselves?

vortexpuppy wrote:Thanks for informing us ThinkforYourSelf and to everybody involved in getting the forum back up and running. Thanks.

Regarding suggestions:
How was the old forum backed up by Schpankme? Was the site ripped and there is now static HTML or is there a database dump of some kind, that can be re-imported?

Can users access their old posts somewhere? To share the work-load, every member could then re-upload their most important posts? Or is this something the admins want to do themselves?

Thank you for the suggestions. Schpankme has the 4 gig of files on a USB stick, and he is going to try sending them to us in batches over Mediafire. If he can do that, then Eric, Lizardking and I will be able to repost them very quickly.
_________________
All about Shillaphobia

Hey everybody, great that we are back and have a home again.
Let's kick ass in 2016 and expose them for the shower of cuntz that they are.

The deletion of the forum has revealed some very interesting information; both Bernard (The Chosenites) and Observicus (who we had believed were genuine members), have turned out to be treacherous and untrustworthy, disloyal Shills.

Observicus berated me in my email inviting him to the new IFERS by saying that the forum had 'dropped off' a lot in the last few months; what the Hell does that mean? We had risen from 25 thousand monthly visitors in March to over 50 thousand in October and December, so he was completely speaking out of his arse.

As for Bernard, he turned out to be even worse, and he showed his true colours by commenting on the 'Banned From IFERS' website, which is a place where Shills moan like bitches about being banned, similar to those fedora wearing freaks who get 'stuck in the friend-zone' on dating sites. The hilarious thing is that we didn't ban Bernard; in fact, we invited him to join this forum.
Like so many Shills, he has started claiming that he has just remembered that he once flew Southern hemisphere flights without stopping to refuel, and by doing so he has hung himself and proven himself to be a disgusting liar.

All in all, I am very pleased with these events; by outing themselves as Shills, they have made my job even easier, like two self-flushing turds.

Good riddance to them.

For those of you waiting to be approved, we're working on getting the forum back to looking like it used to and will do a mass approval of everyone in a few days once the threads are all up again and ready to have new comments. Thanks for your patience and support!

Hi everybody and Happy New Year!
I haven't posted in a long while but am I ever glad this 'runaway train of truth' is still chugging along
Keep up the great work Eric and team!

Good to be back on deck with the new forum.

Hello everyone! Spent the last few days searching for this place (I knew it was somewhere) with no luck, but fortunately today I recovered thinkforyourself's email, which ended up in the spam folder!

Welcome back and thanks admins

Welcome to all the new members, thanks so much for joining! Our apologies, it is taking a bit longer than expected to re-make the forum so it will be another few days before the threads are ready to be posted on. For now please just post in this thread and we'll let you know when the forum is ready to "go live"

The morons have just given us even further promotion by using Tila Tequila to tweet Eric's video. Obviously they are trying to discredit flat earth by associating it with her, and saying she's 'immortal', but they have been stupid enough to link people directly to Eric's 'Flat Earth Conspiracy Documentary' rather than one of their retarded puppets ala Mark Sargent and the story has even made it onto the New York Times.